Depending on what region in Germany are you in, you may hear different words or phrases to what the locals call the Mardi Gras season. In the South in the Swabian region, Fastnacht is based on traditions and folklore. In Bavaria, Fasching is full of fun, parades, and plenty of costumes. Then in the Rhineland places like Cologne and Dusseldorf take the Karneval experiences to the next level!

No matter where you are celebrating the German Karneval or what you are calling it, one thing is certain; you will always find fantastic Fasching food to enjoy!!! And of course, no matter the season, be sure to check off all of my Authentic Foods To Try In Germany!

One of my favorite parts about any of the festivals in Germany is the FOOD!!!  So, what foods are eaten during Karneval? Well, there isn’t really a set or designated food but, depending on where you are, there are some meals, sweets, and treats that you’ll find plenty of during Karneval and Fasching.

The word “Karneval” has derivations in multiple languages (Italian, Portuguese, French…) and its roots, more or less, mean “Meat Dismissal.” Since Fasching and Karneval is the celebrations that lead up to the Catholic season of Lent (where traditionally, meat was not to be eaten- now they suggest “giving meat up” on Fridays during Lent) you’ll notice a lot of meat trends on the list! After all, you’ve gotta get your fill in before it’s “forbidden.”

Likewise, since Lent is a time of giving up gluttony and overindulgences, there are plenty of sweet treats and fatty or fried foods that people love to binge on during the German Karneval and Fasching season.

Planning a Trip to Germany? Join Our Fantastic Traveling in Bavaria Facebook Group! 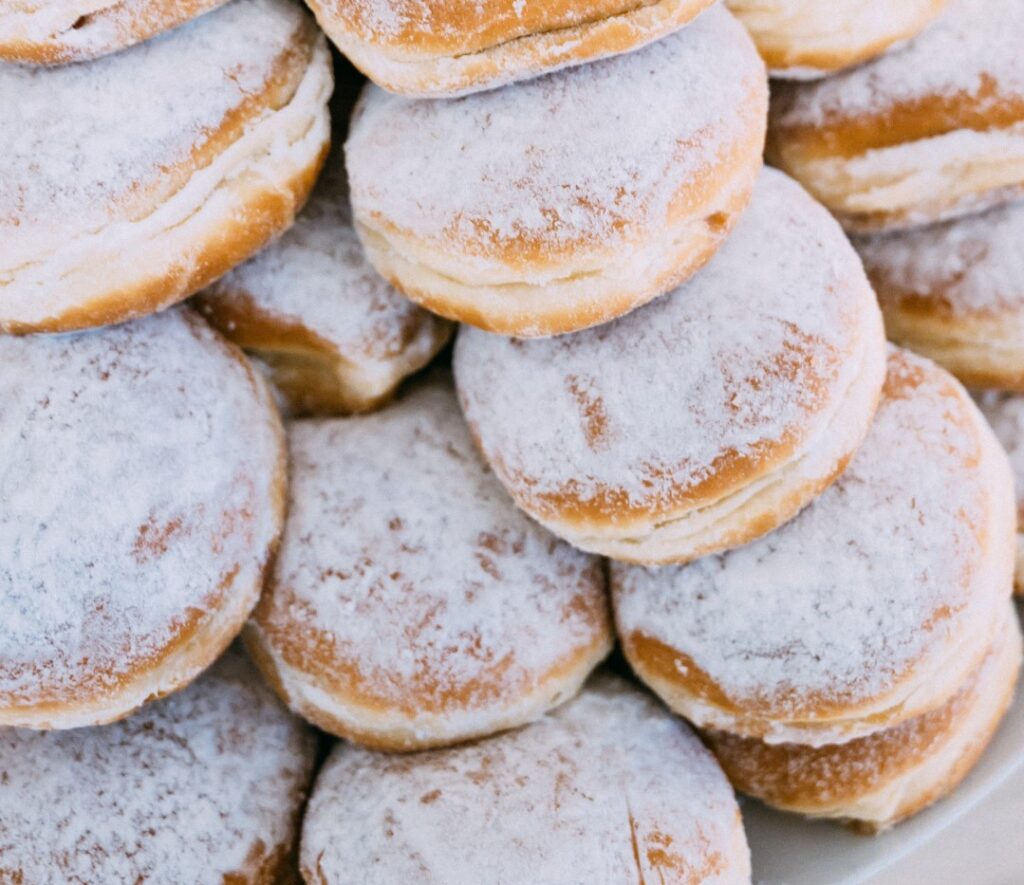 While you can get these “German Doughnuts” really any time of year, they are especially prevalent during the Fasching season. Depending on where you are at, these sweet treats are also called “Berliners.” In Franconia, specifically during Karneval season, you’ll see “Fastnachtsküchle” all over the place.

Walk into any bakery in Germany and you’ll often find these German doughnuts. But, during Karneval, the Germans love taking these fried doughballs to the next level with all sorts of fillings.  Last year, I bought an assortment box. It had all the classics like Marmelade and Chocolate, but I particularly LOVED the Baileys Creme and the Caramel filled ones! Depending on the baker, the fillings can get quite “creative” so it’s always fun to stop into a bakery and see what fun stuff they are whipping up this year! 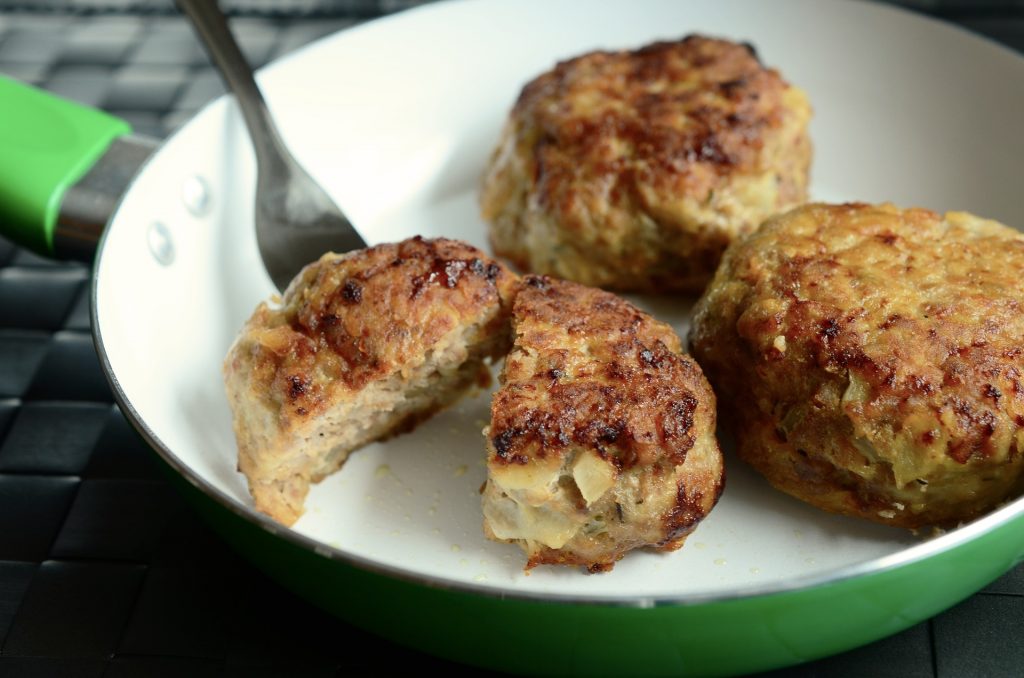 Frikadellen is a classic “fast food” in Germany that you’ll often find at markets and parades. The first time I ordered one at a German Christmas Market the worker described it as a “Meat Cake.” These “German Meatballs” have now become one of my favorites! In some places, they really are like little mini meatballs. Where I live, they are more of a patty (they look a bit like a hamburger). My particular favorite way to enjoy a Frikadelle is when there are carmelized onions slopped on top of the Frikadellen, some sweet Bavarian mustard drizzled on top, and then it is all smacked right in between a crispy bread roll!!! 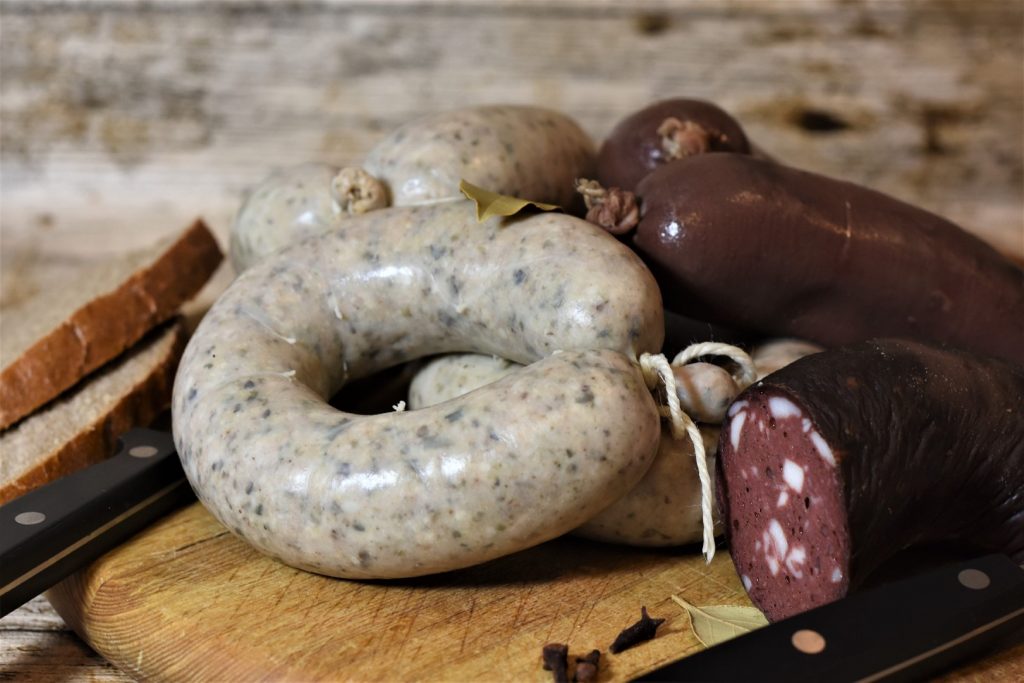 A “Blutwurst” (blood sausage) isn’t the most uncommon sausage in Germany. But particularly in the Rhineland they take this wurst very seriously. In fact, there are very specific traditions and styles that it must be made if it wants to be officially called Flönz (instead of just a “normal Blutwurst.” Similar to things like Champagne and Tequila (which can only be called that if produced IN those geographical areas), you can actually ONLY get a true Flönz in specific areas of the Rhineland region.

The Germans in this area are so proud of their Flönz that there are even songs dedicated just to this wurst!

Living in Bavaria, just about any fest will have a Halbe Hühn (a rotisserie chicken, cut into halves) so naturally, I just thought that the “Halve Hahn” was some dialect and version of the “Half Chicken.”

In the Rhineland, where so many Karneval traditions are celebrated, a “Halver Hahn” is actually a rye bread roll that has been slathered with butter and then topped with cheese (often gouda), pickles, and mustard. You’ll often see them made with onions and paprika as well. While it’s a pretty simple sandwich, it just hits the spot after drinking all that beer! 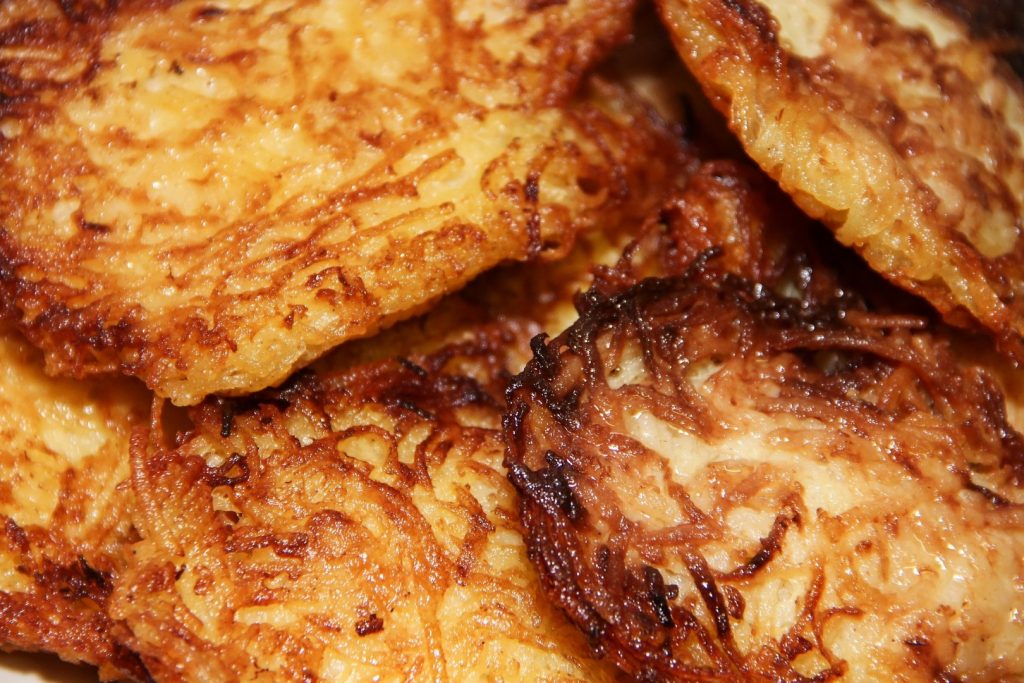 Again, WHAT these are called are going to vary from region to region! Here in Bavaria, you might see it called a Reibekuchen or a Kartoffelpuffer but in Cologne, they are more likely to be called a Rievkooche. It seems like a simple enough dish, but they are SO delicious! They are finely shredded potatoes that are seasoned to perfection with simple seasonings of garlic and onion. They are then fried until they are golden and crispy. Typically, they’ll be served with an apple sauce for dipping or sometimes a sour cream dip will also be an option.

A unique Karneval Food that you are probably only going to find in the Rhineland is what I would kind of call a “potato casserole” dish. Similar to the Rievkooche above, it is a finely grated mixture of potatoes but also has finely sliced onions as well. Seasoned with some salt and pepper and some butter, the mixture is “poured” into a dish and then topped with bacon pieces. Instead of being fried like the Kartoffelpuffer, the Döbbekooche is then baked. The outside gets a wonderful “crust” to it and is the best part! 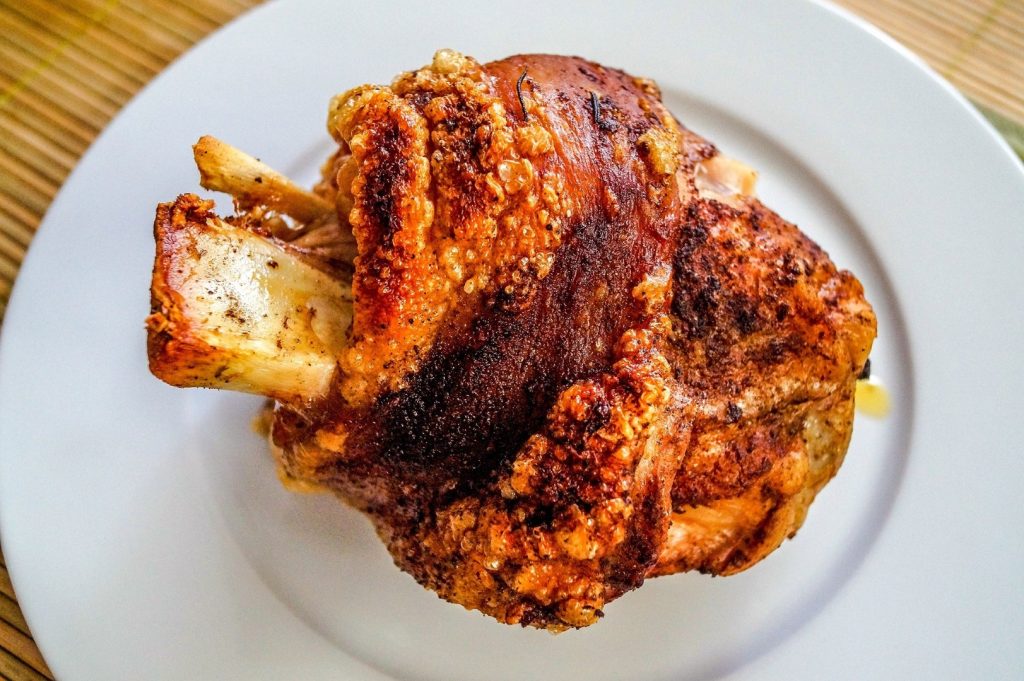 You’ve obviously caught onto the trend that the names for foods vary widely by region. In Bavaria, they have perfected the Pork Knuckle and it’s usually referred to just as “Haxe” (or Schweine Haxen). But in other regions, you might see it be called “Hämcher.” While wursts and schnitzel get the stereotypes for German foods, it’s a Haxe that deserves more attention. What screams “Germany” more than a giant gluttonous ball of pork with the most perfect, crackling skin on the outside and juicy, tender meat on the inside!? It’s often served with a sharp knife just sticking out of it ready for your consumption!

While Gluhwein is most famous during the Christmas Markets in Germany, it’s still a popular drink during Fasching and Karneval. After all, February can be a very cold, wet, and gray time of year! No better way to warm up while out at a Fasching Parade than with a piping hot mug of traditional Gluhwein.

Similar to the wurst mentioned above, while you may find the style of a Kölsch beer elsewhere, it can only be called a Kölsch if it is brewed within 30km of Cologne. And even then, there are strict rules on what constitutes what a Kölsch beer really is. Now, I’m the first to admit that I am not a huge beer connoisseur, so I would just say something like, “Isn’t it pretty much just an Ale or a Lager?” (Apparently, it is kind of like a hybrid of the two according to my beer lover husband) I guess to make a true Kölsch beer, it’s a whole thing!!! Which is why it’s so beloved and drank everywhere near Cologne, which is also where so many festivities for German Karneval take place. You can’t go anywhere in Cologne during Karneval without seeing plenty of Kölsch beers being enjoyed!

How and Where To Celebrate Karneval and Fasching in Germany (2023)

Things To Do In Germany in February 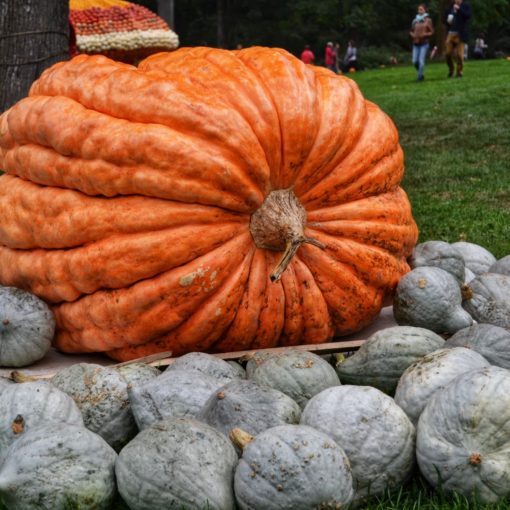 The World’s Largest Pumpkin Festival [This post may contain affiliate links where we earn a small commission.  Please see our disclosure for […] 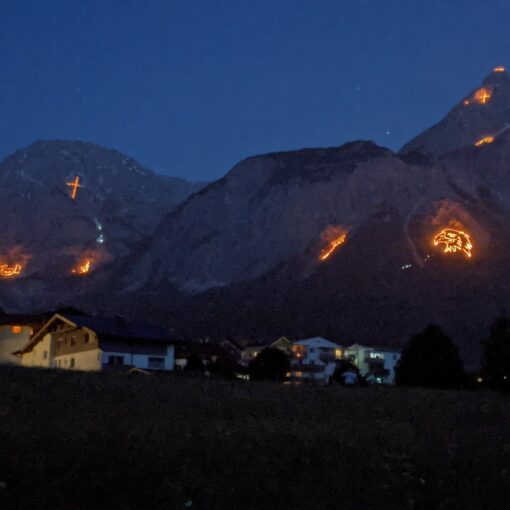 I can almost envision how it all started way back in the 1300’s.  Just a bunch of German/Austrian Mountain men sitting around, […] 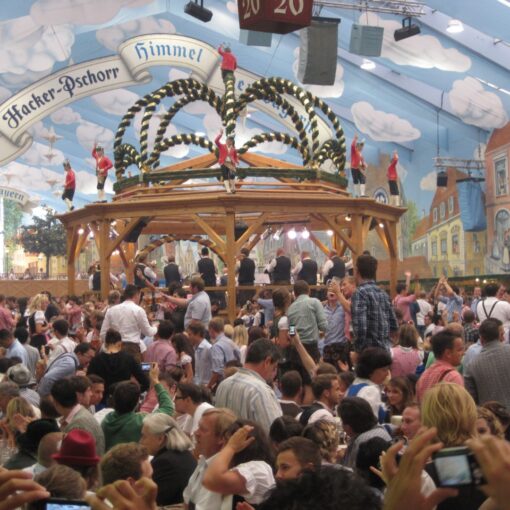 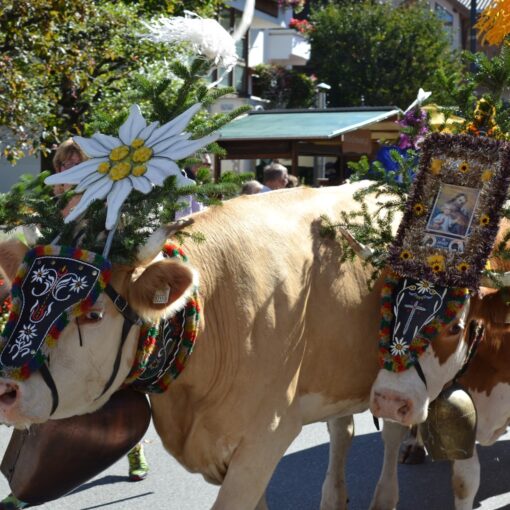