Since having kids, traveling in Germany with Children has taken on a different look than when we were just a young, adventurous couple.  One thing that we’ve started adding to our repertoire is having fun at all the theme parks Germany has to offer!

So, last year, a good friend of ours told us about this “smaller, younger child” amusement park, perfect for out littler ones; Churpfalzpark Loifling.  So, off we went to explore.  Now, I’m a blog writer.  That means that I am typically highly opinionated and I love to put into words our adventures.

But, Churpfalz has me a bit flabbergasted and confused on how to accurately depict this theme park. You walk into meticulously manicured gardens, lined with Roman and Greek style statues and columns, something you would never expect from a kids’ theme park! Yet, as you walk around, it’s almost like stepping back in time, both with the age of the rides, as well as the laissez faire attitude of the workers and families alike.

So, hang in there with me throughout this post, as I may seem all over the place in my recommendations, but I think that actually kind of goes with the park itself! 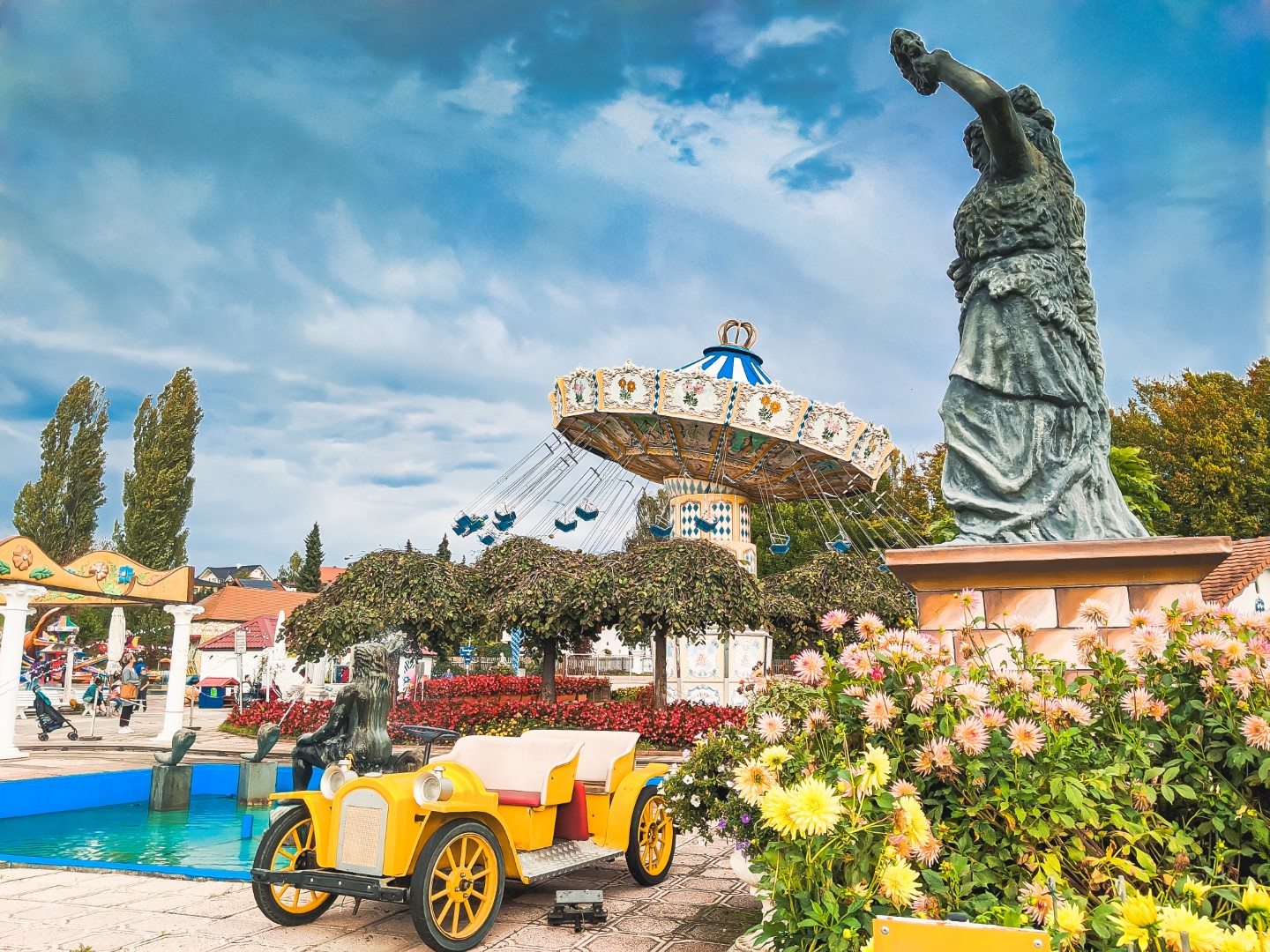 With about 80 rides and attractions and over 1 million flowers, it is definitely a unique place!

Other Theme Parks in Germany Articles That May Interest You:

Churpfalzpark is near the Bavarian Forest, about 15 minutes South of Cham and 50 minutes East of Regensburg.

Pretty much the only way to get to the “Freizeitpark” (amusement park) is to drive.

Have You Joined Our Travel Planning and Day Trips in Bavaria Facebook Group Yet? 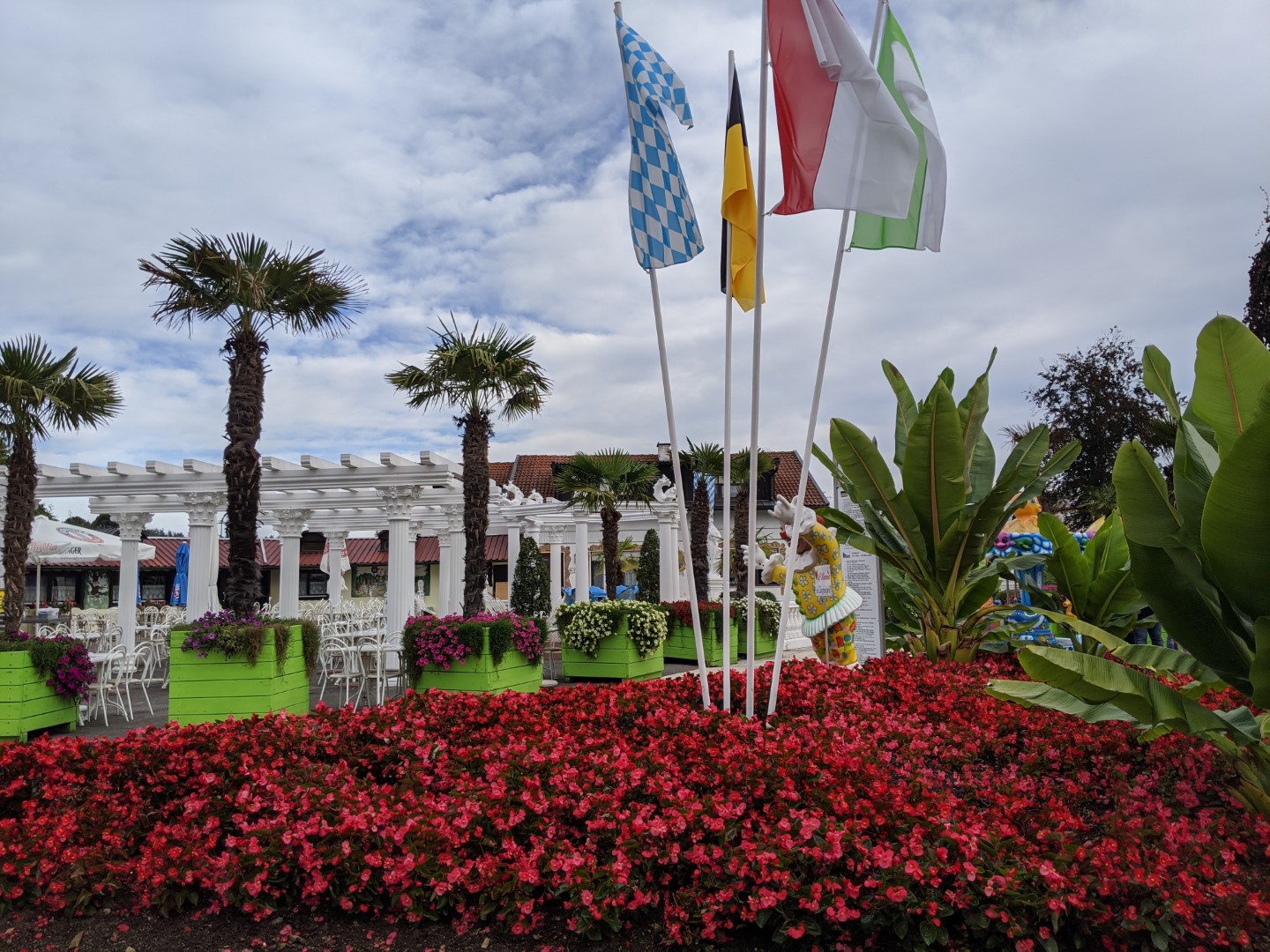 If you’ve been around this blog a bit, you know we are more on the frugal side of travel.  So, 23 Euro really isn’t that expensive in the scheme of things, especially when you consider that it gives your kids a jam-packed, full day of fun and play.  However, I have wondered after looking around the park where that money goes exactly.  Considering places like Playmobil Land is only half that cost, Churpfalzpark does seem a bit more expensive. But for us, it’s a nice once-a-year day out kinda place.  Anything more than that and it’s worth considering the season ticket. 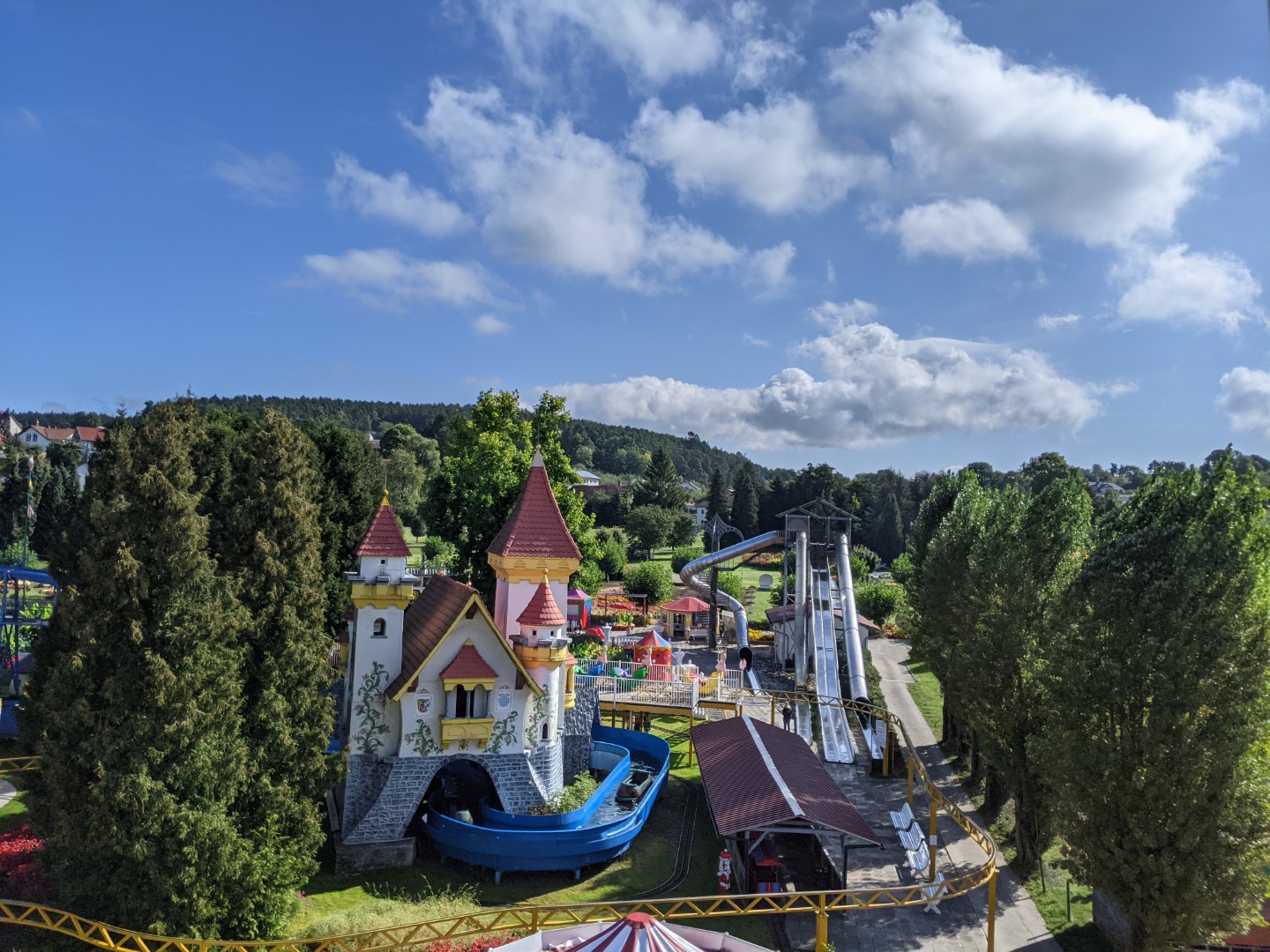 One of the things that I love about living in Germany is its laid back mentality.  And if there is one way to, politely, describe Churpfalzpark, it might just be that; laid back.

When you arrive, you’ll find a gravel parking lot with plenty of odds and ends scattered along the edges.  Now, I’m not saying it looks like a junkyard, but I am saying that the area could definitely be spruced up a bit and spare parts could be hidden away.

Inside the park, it is in no way junky looking or feeling, but there is a bit of a “handyman’s” vibe going on and many of the attractions look…well, weathered.

The park needs some serious updating, cleaning, and modernization to say the least.  But in a really weird way, this kind of adds to the odd charm of the place.

If you could envision a bunch of old, carnival rides that had been decommissioned, you are close to what Churpfalzpark is.  Think rides like “mini coasters,” carousels, bumper cars, and ferris wheels.

Most of these rides look like they’ve seen better days and I’ll be 100% honest, if they were any bigger or faster, I might be much more skeptical of the safety on them.

In fact, I think it’s pretty important to know before heading to the park that some of the rides look like they could be from the ’70s, when the park was originally opened.  Let’s just say that I have no idea what Germany’s rules and regulations and safety codes are but the maintenance conditions on some of the attractions are highly questionable, at best. If you are a highly OCD or major helicopter parent, this may not be the place for you.

In addition to the “carnival” type rides, there are some really unique old- school rides that are basically self-powered!  These are actually pretty fun and really add to the peculiar feel of the park.  For example, there are several paddle boat-style rides, such as a paddle swan, that you take around a little lake loop.  And then there is the Fairy Monorail that you pedal around the high track yourself!

There are also several attractions, such as Duck Floats that you will push your child around in yourself, and many areas don’t even have attendants because you just press a button yourself to make it start (like a chairlift zipline, or a merry go round).

So, with all that being said, I felt it highly imperative as the adult/ parent to always double (triple) check any rides that required latching in or that belts/lap bars to make sure that it was absolutely secured, tight, and locked.  Even rides that did have attendants, I did this as well.

When there are attendants running rides, it’s not uncommon for them to be managing a few at a time, so that means that they don’t have eyes on one ride at all times.

This one was especially strange.  Every once in awhile, we’d encounter something that was extra.  But not by a lot, as in, a random mini carosoul at the front was 50 cents or there was an excavation digger that was a few bucks.  Unfortunately, there were included go carts for older kids, but a perfectly sized one for kids under three was something like 50 cents as well.

You can also do some Dino Golf for 1 Euro.

Obviously, a Euro here or there isn’t a big deal, but…..why?? Why not just have everything included in the price to begin with?? 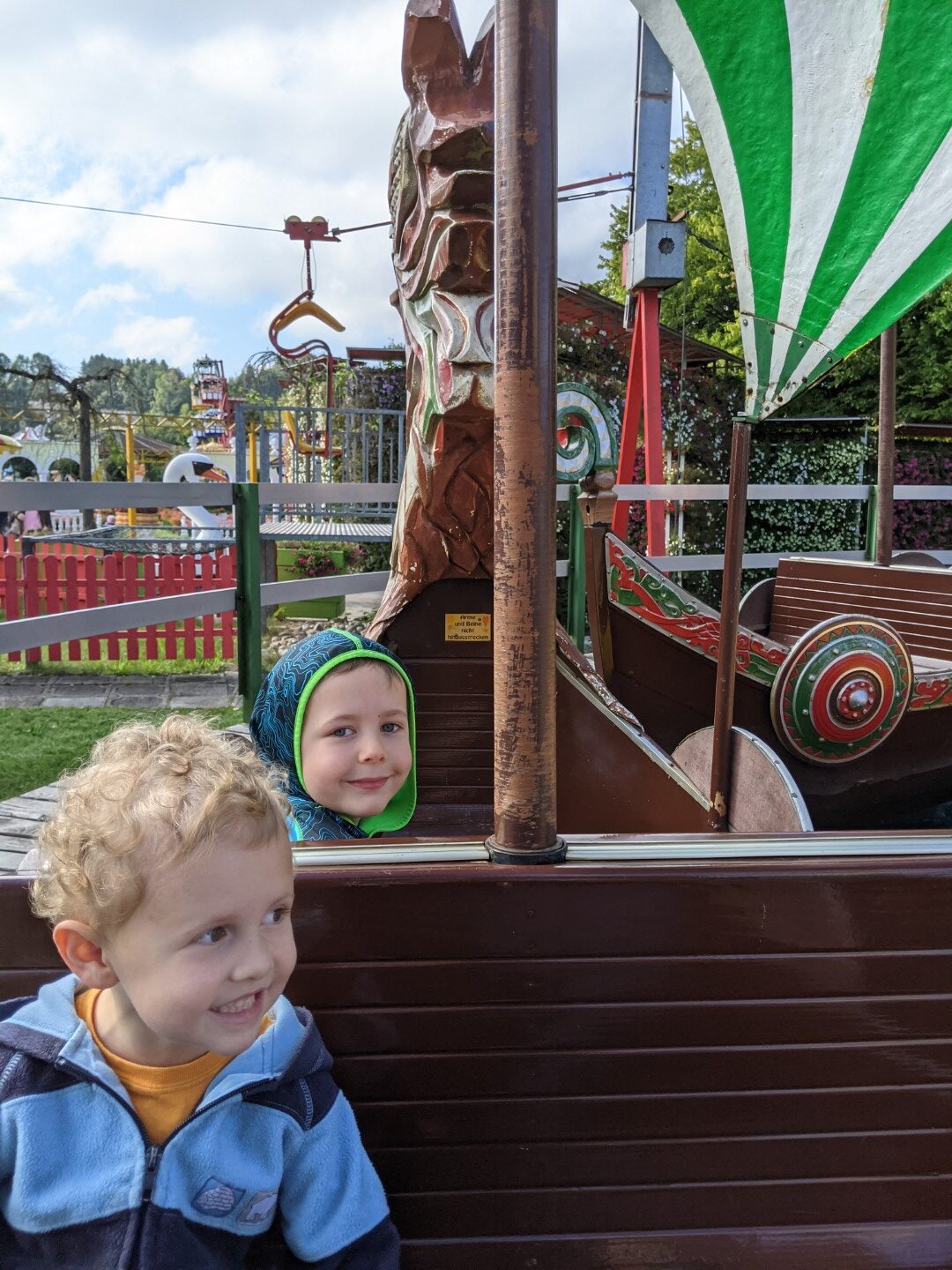 This little amusement park is absolutely ideal for young kids.  The first year we went, my boys were 2 and 4 and we went again this year (with a 7 year old friend) and both times it was just about ideal for their age ranges.

I would say that the park is absolutely perfect for kids 2-8.  Kids as old as 10 years old may still enjoy some of the bigger rides (as there are a few, like a “Wid Raft” ride and a few other smaller coaster style rides).

In fact, I think this is one of the things that makes the park different from other amusement parks in Germany.  Because it is geared towards young kids, we found it absolutely perfect for a day out with Oma and Papa as well!  They loved watching the grandkids and some of the rides were even the perfect Oma and Opa speeds!

Tips On Getting the Most of Your Day

The First and Last Hours Of the Opening Times 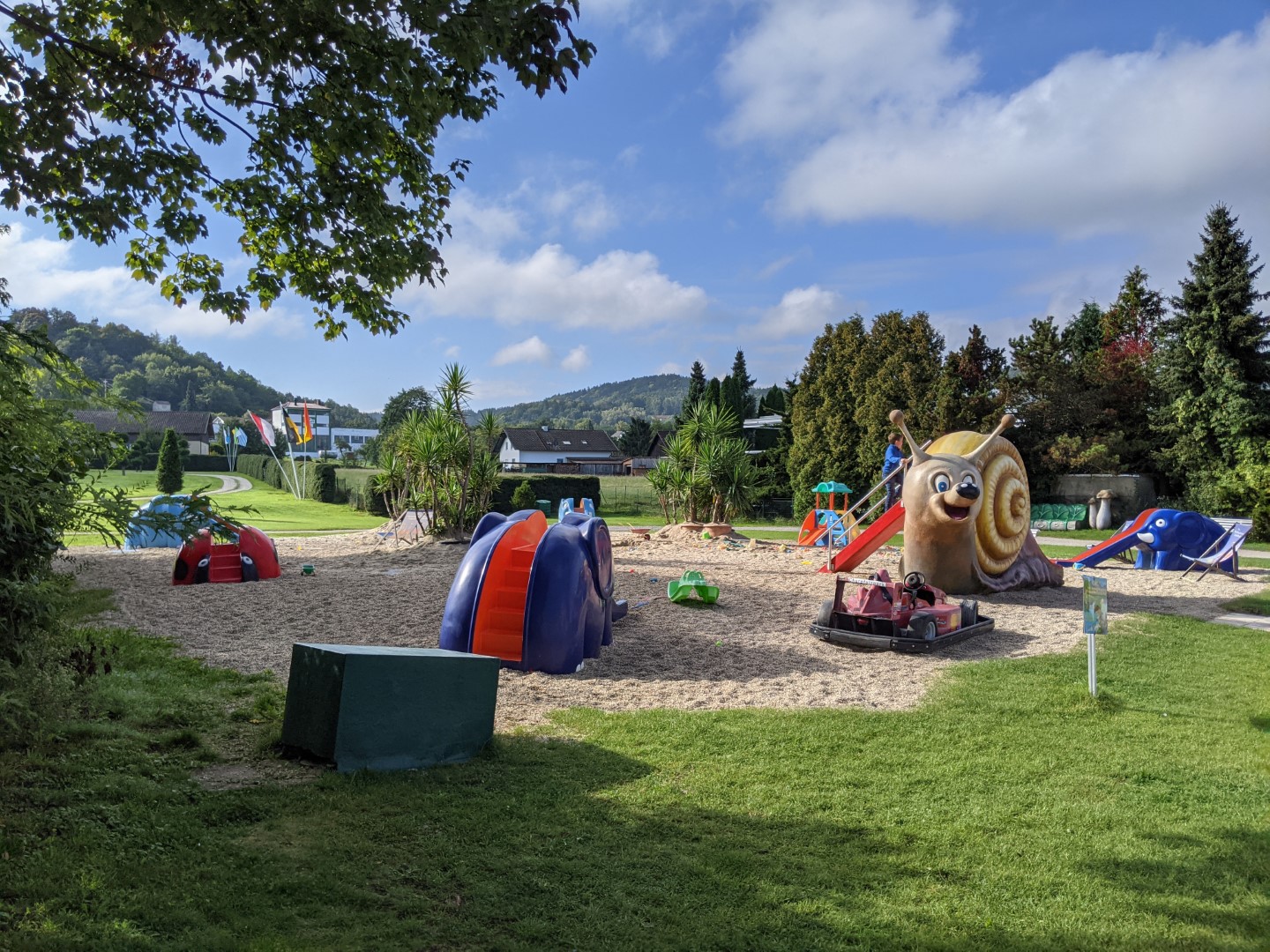 The park is open from 9am-6pm but the rides don’t actually start operating until 10am and likewise, they actually stop at 5pm.

However, there are several playground areas throughout the park! I personally think it’s a bit silly to spend time playing in the sand during the hours that the rides are operating, which is something I can do at a playground near home for free.

Therefore, I recommend either going all the way to the back of the park where there are some out of the way play areas, or there is also a little playground at the entrance and doing that right at 9am until the rides start.  Likewise, instead of leaving right at 5, finish your day at the playgrounds before heading home.

Head Straight For the Back When You Arrive

Like a lot of amusement parks, kids get shiny object syndrome as soon as they see rides and they want to get on them immediately.  This means that oftentimes if you can somehow manage to get them to the back of the park first, you’ll have some of the rides and areas almost completely to yourself!

Keep the Bumper Cars for Last

If your kids don’t want to play on the playgrounds for the last hour, the bumper cars actually stay on until 6pm! If your kids are anything like mine, they could easily spend 45 minutes here alone.  Maximize your time by doing something else in the middle of the day and use that last hour when no other rides are running and finish up on the bumper cars.

Do The Train Ride 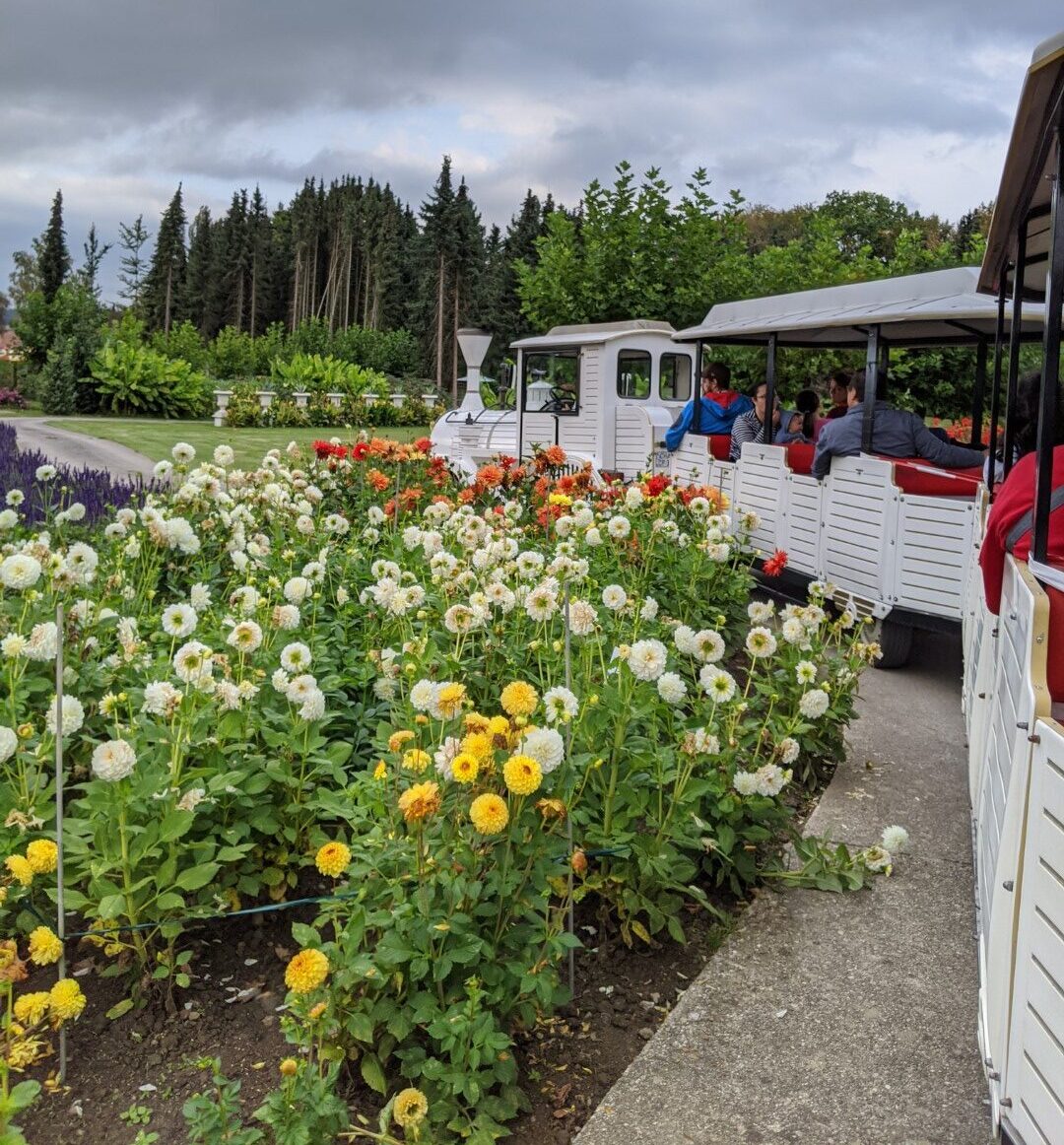 Everyone loves the train ride!  Kids love it because….well, what little kid doesn’t love trains!? As an adult, this is where the expansive gardens are really showcased and are mindblowing at just how many there are (if only the owners took such pride and meticulousness on the rides).  It’s also great because it takes you around the entire park, so you can see everything that it has to offer.

The train runs every 15 minutes and leaves near the giant carnival swing.

Bring a Swimsuit and Towels 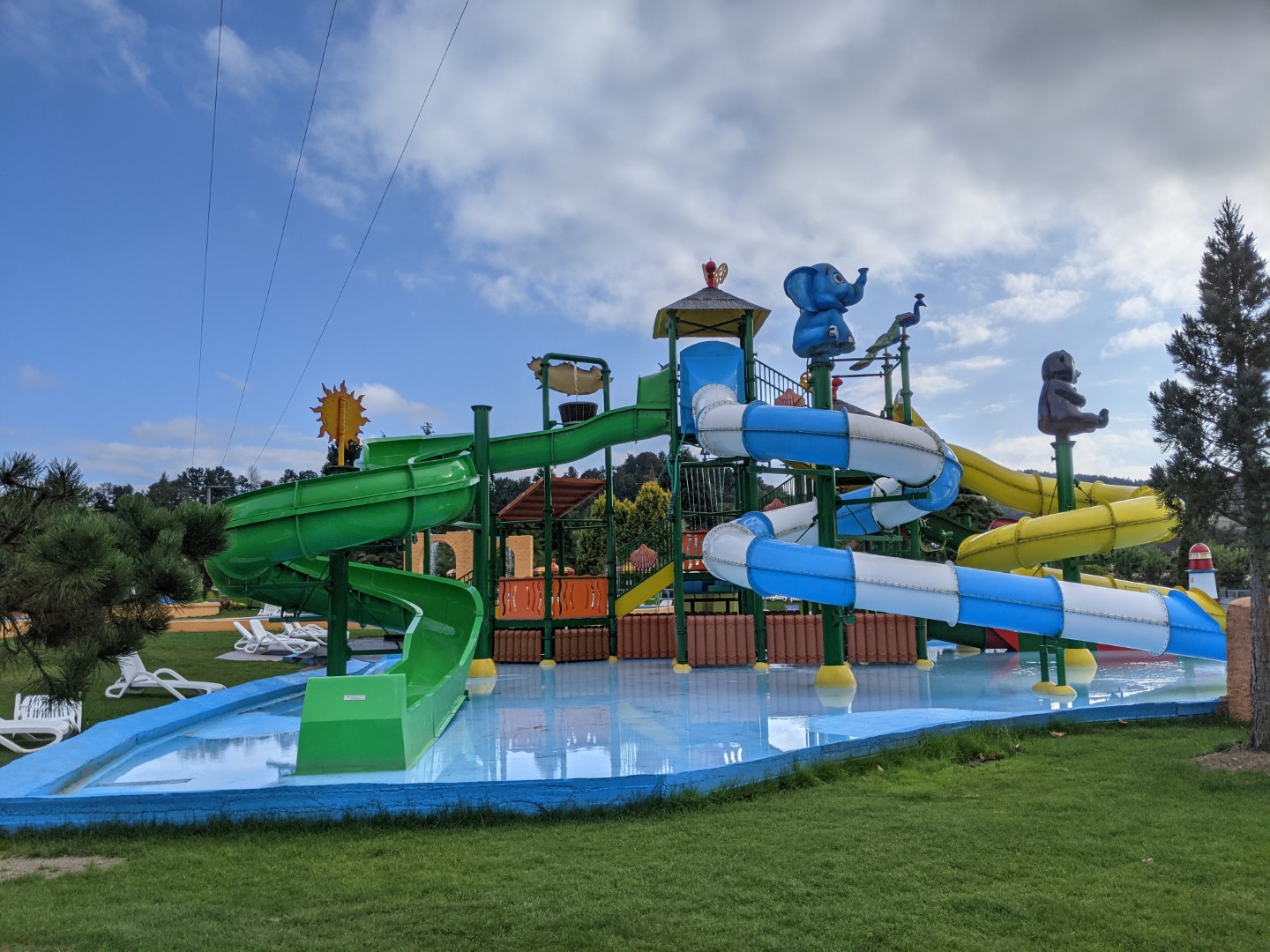 On those hot, summer days, there is an entire water structure complete with water slides and bucket dumps that is perfect for cooling down.  Make sure to have a swimsuit and towel in your bag.

There is a restaurant on site.  You’ll find typical park-style food- some schnitzels, currywurst, chicken nuggets, and pizza. For the price, it’s definitely nothing to write home about but is filling nonetheless. You are in Bavaria, so of course, you can get some beers as well.  You can also order coffees, juices for kids, etc.

There is plenty of ice cream stands throughout the park as well and even a fun cotton candy machine.

If you don’t want to pay for the food there, I saw plenty of families with coolers and their own food.  There are no picnic tables, but there are plenty of benches and places to sit down to eat, or there is also plenty of green space on the grass in places like the pirate ship or in the back gardens area.

Some Of Our Favorite Rides at Churpfalz 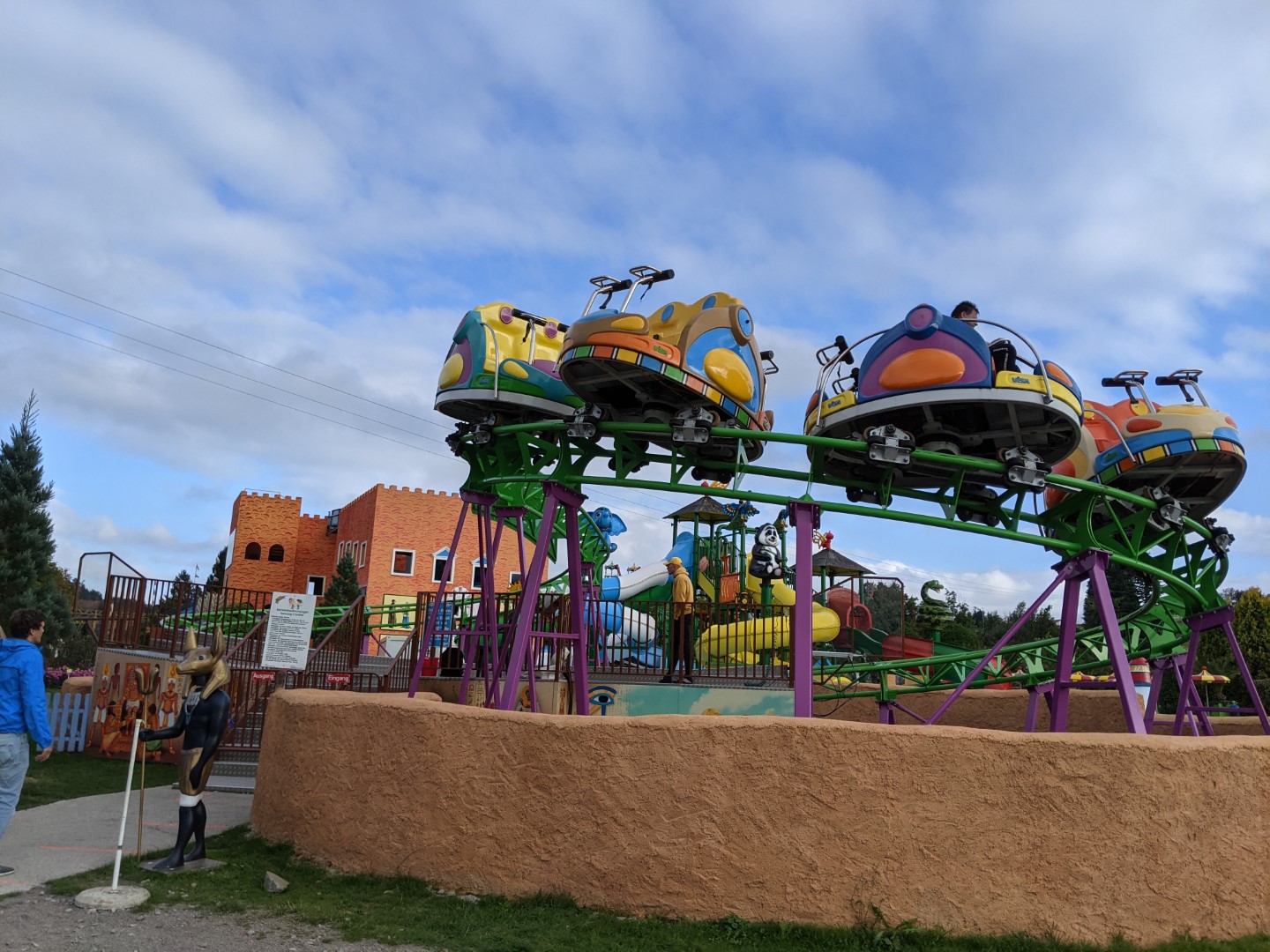 Kind of like a more grown up version of tea cups! Both me and the kiddo loved this one! There are numerous, small “circular” rides like this caterpillar one or another, was Viking ships that went around and around. There are numerous carousel swings in the park.  There is a small one, perfect for toddlers, this one, great for young kids, and the huge one, that older children can soar in the air on.

The Pirate Ships and Shooting Cannons

I think the best way to sum up a day at Churpfalzpark Freizeitpark is to simply put in a rating scale, as it is kind of hard to completely put into words this strange park.

Cleanliness: ★★★★ (The park itself wasn’t DIRTY, but things like the parking lot looked “junky” and it didn’t seem like Covid measures were taken extremely seriously)

Things To Do In The Black Forest With Kids 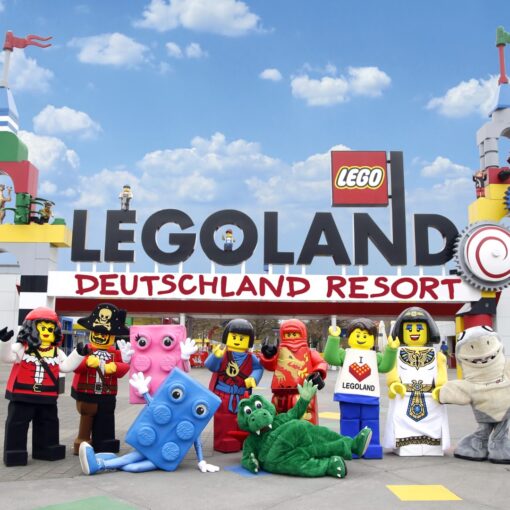 This post may contain affiliate links where we earn a small commission.  Please see our disclosure for more information and thank you […] 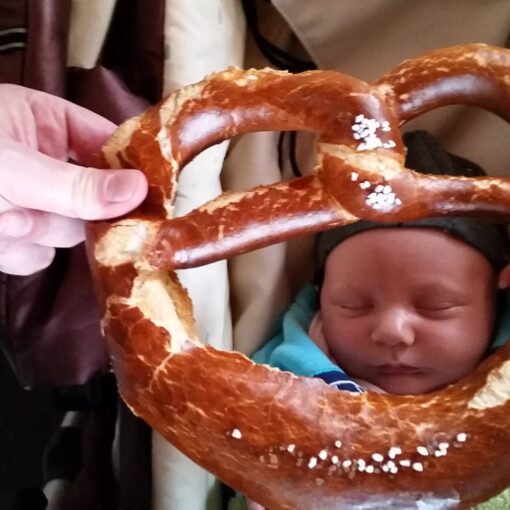 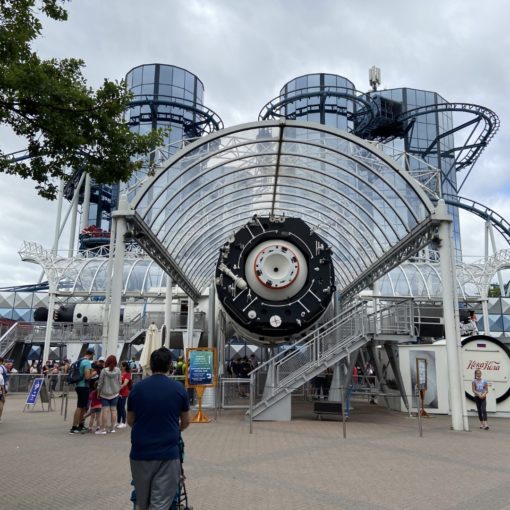